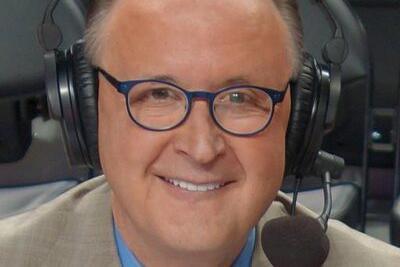 One of the most recognizable voices in Nebraska will be honored this fall. Kent Pavelka will have his Face on the Barroom Floor at the Omaha Press Club.

Pavelka will become the 158th face added to the floor when he is added during a dinner and roast on September 13 at the Omaha Press Club.

The tradition began in 1971, and Pavelka will have several roasters on hand, including Larry the Cable Guy, Nebraska basketball coach Tim Miles and longtime broadcast partners Matt Davison and Gary Sadlemyer.

The event is open to the public. It will begin at 5:30 p.m. with a reception. Dinner will be served at 6:30 p.m. with the roast starting around 8 p.m. Cost for the event will be $50 for members and $60 for non-members and reservations can be made by visiting the Omaha Press Club website.

“Kent is a great choice,” said Woody Bradford, president of the Omaha Press Club. “He’s a household name for any Nebraska sports fan. The roast should be terrific – people pay big money to see Larry the Cable Guy perform – and the other three roasters are fantastic in their own right. I have no doubt it will be a night to remember at the Press Club. I can’t wait.”

Pavelka is entering his 32nd season of broadcasting Husker basketball games in 2018-19, and has broadcast nearly 1,250 Husker sporting events during his career.

In addition, he was the voice of Husker football for 22 seasons between 1974-1995 and also called games for for Midland College, Fremont High School, Fremont Bergan High School and Omaha high schools during his illustrious career.

In addition to his sports announcing, Pavelka has been a fixture on Omaha radio, serving as a morning show host/operations manager for KFAB from 1974 to 2001 and as morning show host for KKAR-AM (1290) from 2001 -2005.

Since 2006, he has run his own company, Kent Pavelka & Associates, providing his on-camera and voice talents and marketing skills to a number of clients.