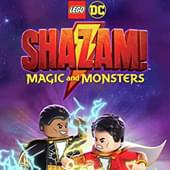 Enter to win a digital copy of LEGO® DC Shazam! Magic and Monsters.

There’s a new hero in town and his name is Shazam! This earnest do-gooder wants to join the Justice League, but in order to do so, he has to reveal his identity as ten year old Billy Batson! Egads! Now on Digital. DVD and Blu-ray™ June 16th! #LEGODCShazam